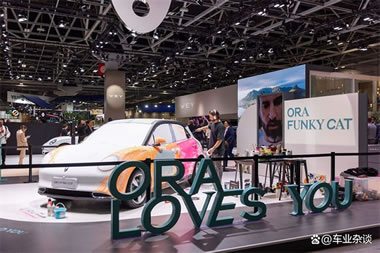 This year marks the 50th anniversary of the establishment of diplomatic relations between China and Germany. Trade is always an important link to promote exchanges between the two countries and the automobile industry is undoubtedly an indispensable part of the link. In recent two years, with the transformation to new energy industry, many German enterprises have increased their investment in China. At the same time, a growing number of Chinese automobile enterprises have begun to announce the entry into the European market. Originating from Europe and heading for Europe

Since the outbreak of the epidemic in 2020, the resilience of Chinese automobile industry chain has boosted the export market. According to relevant statistics, the sales volume in the export market in 2021 reached 2.138 million units, with a year-on-year growth of 102%. From January to September, 2022, the sales volume in the export market reached 2.27 million units, with an increase of 51% compared with the same period in 2021---among which there are many excellent products "Made in Chongqing". According to the news released by Chongqing Municipal Commission of Commerce, in the first half of 2022, Chongqing's complete vehicle exports increased by 48.2%. Many Chinese automakers like SWM have overcome the difficulties of increasing raw material price and rising logistics costs and expanded overseas markets. On November 5, a series of SWM G01F vehicles were ready for delivery in Fuling Industrial Park, Chongqing and Shineray held a grand departure ceremony. It is reported that this is Shineray's first batch of passenger cars exported to the European market. Founded in 2016, SWM was once a popular off-road vehicle brand in Europe. After being acquired by East Shineray, it became promising among the domestic passenger cars with a new image. At present, under the brand of SWM, many SUV models such as SWM Big Tiger, SWM G01, X7, X3, etc. have been developed and launched. The model exported to Germany this time is SWM G01F, which is positioned as a compact SUV. The wing-span front grilles customized for SUV, regular body lines and dynamic accessories for sports car make the complete vehicle look full of strength. The decoration of red and black interior trimming, crystal gearshift button and electronic parking brake add a lot of exquisiteness and sportiness to the spacious and transparent interior atmosphere. In terms of power, this new model is equipped with a new generation of 1.5T S-power and a 7-gear wet DCT dual-clutch transmission, realizing a maximum power of 115 kW and a maximum torque of 212 N·m. According to the report, this power train after adjusted by the Italian research institute and the domestic R&D team shows excellent performance in acceleration and economy. As we all know, at present, the China VI Emission Standard followed by domestic passenger cars is slightly stricter than Europe VI. The successful export of SWM vehicles to Germany just fully proves the product strength, which can be described as originating from Europe and heading for Europe. All the time, SWM has been deeply involved in the off-road vehicle market. Combined with the demand of consumers in China, it has developed and produced seven-seat SUV which has achieved a considerable share in the market segments. In 2019, the market of passenger car ended the development dividend period of successive years of growth. During this period, brands such as KENBO, BISU, BORGWARD and ZOTYE were kicked out or marginalized, while SWM Motors has developed to this day with its tenacity and strength. In such a fierce competitive environment, this private vehicle company has always maintained a keen market sense and solid cost control ability-fashionable appearance, reasonable price and reliable quality have become the distinctive product labels of SWM Motors.

International Vision of "Made in Chongqing" In the early years, when first entering Chinese market, SWM would deliberately emphasize the features of European vehicle, because at that time, many consumers in China felt that the products made in Europe were more reliable. However, in the past two years, when dealing with overseas businesses, we could clearly feel that the recognition of Chinese brands in many regions and even developed countries has been obviously improved. Today, the vehicles manufactured by Chinese brands are as good as foreign ones, and even have some cost advantages." A colleague in charge of SWM's overseas business shared his feelings of brand promotion over the years. According to the regional distribution of domestic exporters released by Cui Dongshu's team, the top provinces and cities include Shanghai, Anhui, Zhejiang, Chongqing and Shandong. In 2022, Chongqing's automobile exports accounted for 10%. Why Chongqing can rank among the top cities in China is because that on the one hand, it has a perfect automobile supporting industrial cluster, which provides a competitive advantage of low cost and high cost-performance ratio and on the other hand, it benefits from the support of "the Belt and Road Initiative". "Made in Chongqing" is not suddenly emerging in overseas markets, because local enterprises have never lowered their international vision. For example, SWM Motors exporting vehicles to Germany this time is affiliated to Shineray. Founded in 1997, Shineray is one of the top 500 manufacturing enterprises in China, engaged in four sectors: automobile, motorcycle, universal agricultural machinery, smart travel and financial leasing. Since the beginning of establishment, it has laid out overseas markets. At present, its products are exported to nearly 50 countries and regions around the world. It is reported that SWM Motors has signed a cooperation agreement with FinDreams Powertrain to actively carry out the transformation to new energy industry. With the orderly development of subsequent hybrid vehicles and pure electric vehicles, SWM's export business will be further expanded.

Postscript: "Today's world is experiencing profound changes unseen in a century", but the overall trend of economic globalization will not change and the pattern equalization is an important idea to form a community of shared future and interest. According to relevant statistics, in 2021, German exports to China amounted to 103.56 billion Euros and imports from China amounted to 142.96 billion Euros. Since 2015, China has been Germany's largest trading partner for six consecutive years. Whether exported or imported, automobiles and auto parts are one of the most important commodities. Nowadays, one out of every five passenger cars sold in China is manufactured by German brands. With the rise and development of independent brands and the steady deepening of trade between the two countries, brands like SWM motors have the chance to be known by more European consumers and will be popular with local users.